Fiction that explores the monsters and strangers among us.

Improbable Fiction is a play written by Alan Ackybourn that runs through June 4, 2017 featuring the Buffalo Theatre Ensemble at the McAninch Arts Center at College of DuPage located at Fawell and Park Boulevards in Glen Ellyn, IL. The play stars Robert Jordan Bailey who has graciously agreed to stop by for a blog visit. It’s a must-see for writers and anyone who loves a writer. 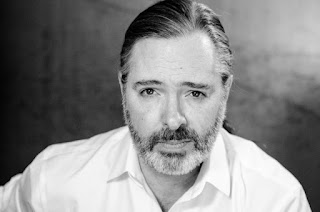 Tell us a bit about Improbable Fiction. What drew you to this play?
The script follows an amateur writing group’s monthly meeting. You get to know an amusing group of writers all struggling with the creative process. Act II turns what you have learned on its head by fancifully exploring a common exercise utilized by writers groups. The show is both an engaging character study and a rip-roaring farce.

BTE has a long history with the playwirght, Alan Ackybourn. This particular script was written for the 50th anniversary celebration of the Stephen Joseph Theatre in Scarborough, England, where he served as artistic director. Since this is BTE’s 30th anniversary season, we thought the celebratory tie-in appropriate. We also loved the theatricality of the piece and the way it speaks to and pokes fun at the creative process while all the while championing the effort.

What originally drew me to this play? Well to be honest, when I first read it, I wasn’t a fan. But one of the distinguishing elements of playscripts is that they are not a sum unto themselves but simply the written pathway for what is intended to be a live action event. Sometimes what is on the page is hard to visualize. Thankfully Connie and Amelia (our artistic director and associate director) saw the charm and potential that eluded me. Once I started working on the piece, I saw so much that I had missed. I love playing Arnold. He is such a sweet, open soul, full of heart and empathy.

What can audiences expect when they go to see Improbable Fiction?
Surprises! Act I is all about getting to know the members of the writers group – and they are a lovable bunch of eccentrics.  But Act II takes a surprising turn that keeps you guessing until the end! Audiences can expect to fall in love with these characters but also expect to leave the evening sore from belly laughs! And there are clever insights along the way as well.

What do you find to be most interesting about your character in Improbable Fiction?
Arnold has great empathy for the struggles of the other writers in the group while not having a shred of self-pity for his own perceived lack of creative imagination. His backstory is that of a man who constantly gives of himself and has unwittingly crafted an idea of himself that may be flawed. I find the flawed narratives we accidentally write for ourselves to be fascinating. You don’t know what you don’t know, right? Arnold also ends up caught in crazy and shocking events and, for me, getting to play that is a comic gift. It’s sort of like being in an old episode of “Bewitched!”

What is your favorite thing about acting?
Gosh, that’s a hard one.  I’ve been acting for thirty years now and I would have to say there have probably been different “favorite” things at different times. Actor friends would harass me for saying it – as it sounds horribly pretentious – but I really love the “work” of it. The research, (learning about time of the script, background of the character, dialect, etc.), creating a character and establishing the relationships with the other characters.  One of the first things audiences often comment on is “how did you memorize all those lines?” but that’s only the start. Knowing what your character says and how he chooses to say it informs so much of what you create. And the BTE rehearsal process is so quick (5 weeks), one needs to show up the first day completely memorized!

Have you ever tried to write a novel?
I have thought about it.  I love to read – something theatre gets in the way of – and I have toyed with giving writing a try. They say everyone has one novel in them, maybe I will attempt to squeeze mine out one day.

What do you have coming up next?
BTE is gearing up for its 31st season so I am putting a lot of energy into that. As an ensemble and board member, I am involved even when I am not on stage. All three shows of our 31st season – 39 Steps, Time Stands Still and Outside Mullingar, focus on lovers whose relationships are in flux. I will be acting in the Spring show Outside Mullingar. It’s a more serious script than what I have done this year. Though I love farce, drama with a hint of comedy is what I really love doing. If you haven’t gotten your subscription for next year, please purchase it before June 6th so you get the 25% discount! I have also been doing some auditions so who knows, maybe I will pop up on some other stages before spring of 2018!
Posted by Paul R. Lloyd at 2:41 PM No comments:

Snpgrdxz and the Time Monsters

Teenage alien shape shifter lands in Wheaton, Illinois. This is book 1 of a 4-book series. Book 4 to be released later this year.

Murder, Mayhem and Mischief in West Chester, PA. This noir thriller will leave you breathless up to the blockbuster ending.

The paperback version of your favorite book makes a great gift for a friend.